Broadcasts on Biafra Human Rights Radio by estranged Deputy-Leader of the proscribed Indigenous People of Biafra (IPOB), Alphonsus Uche Okafor-Mefor, has been met with disapproval.

This writer monitored Mefor’s recent broadcasts and discovered that many commenters on his page posit that the UK-based activist does not have the personality of IPOB leader, Nnamdi Kanu – whom he is rugby-tackling.

To be candid, Mefor lacks the charisma of Kanu – by a mile. His addresses are drab.

Mefor’s standpoint as it concerns the Biafra struggle might be appropriate, but what you do not have, you cannot give.

Kanu, 53, made a special broadcast last Saturday where he formally announced the formation of the Eastern Security Network, and Biafra apologists followed his orders without reservation.

Unlike Mefor, Nnamdi Kanu is worshipped by many Biafra supporters

Kanu, over time, has attained a god-like status and commands a cult-followership of irate, easily angered individuals who make up the IPOB group.

The Abia-born activist indeed has an infectious personality. 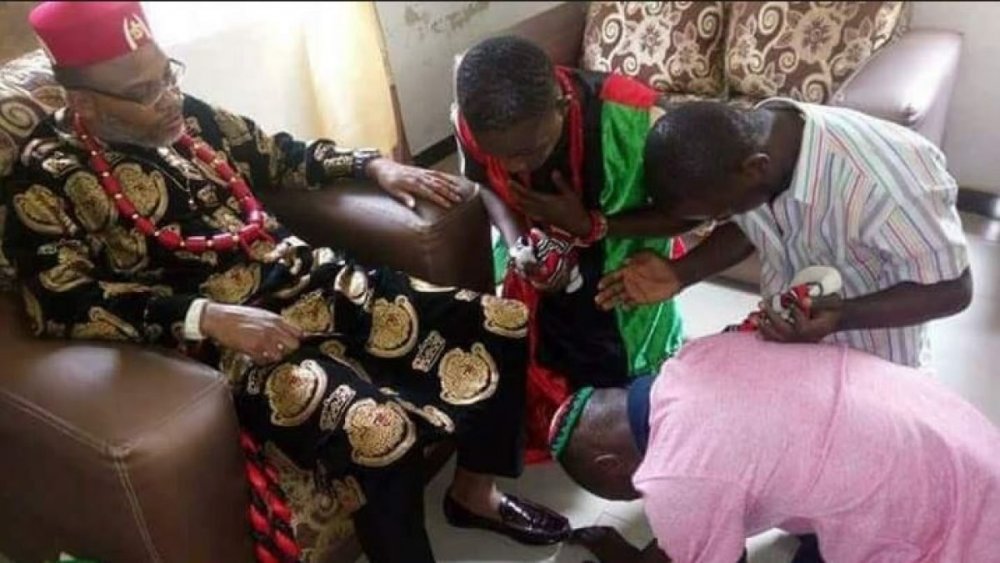 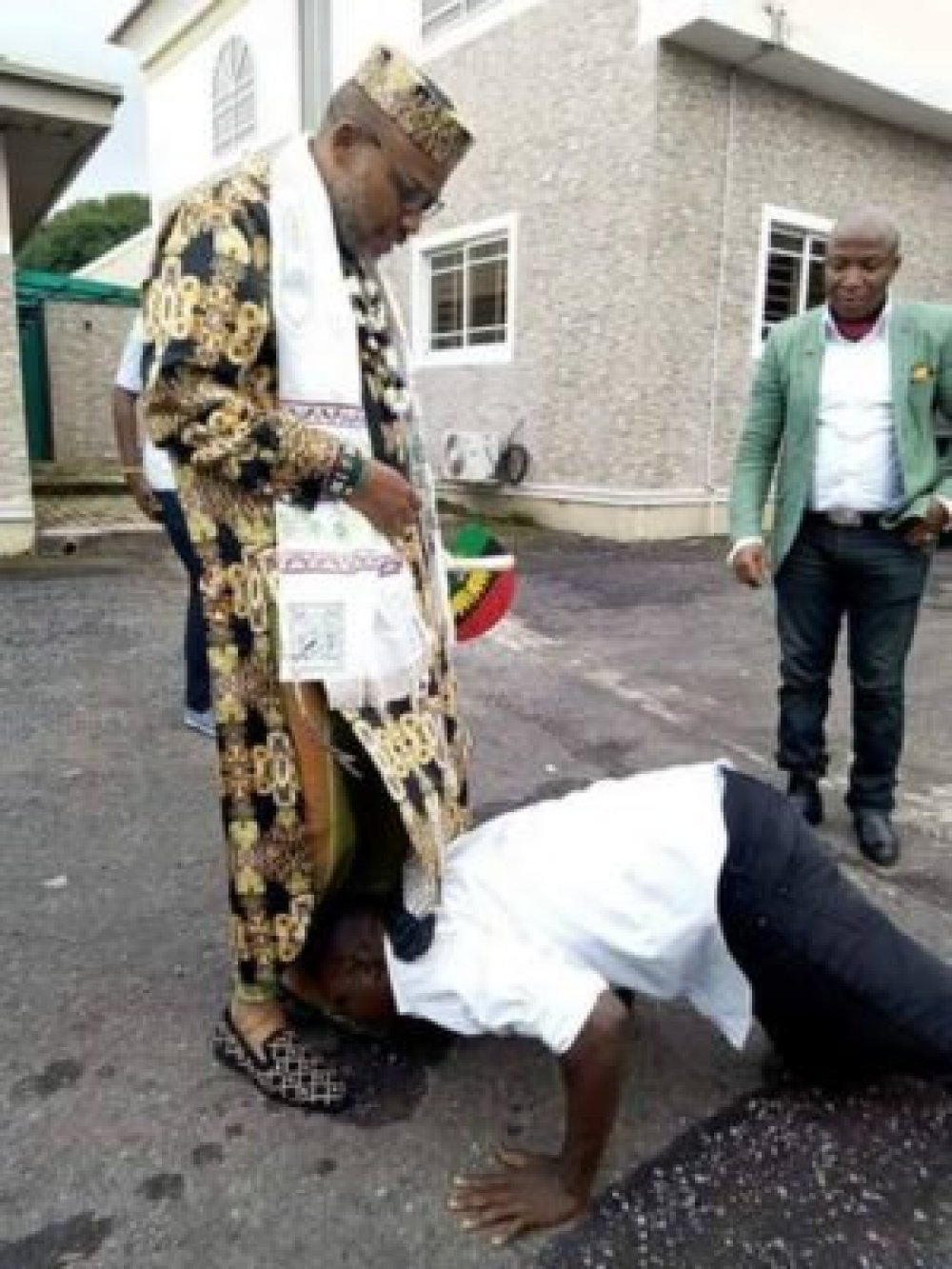 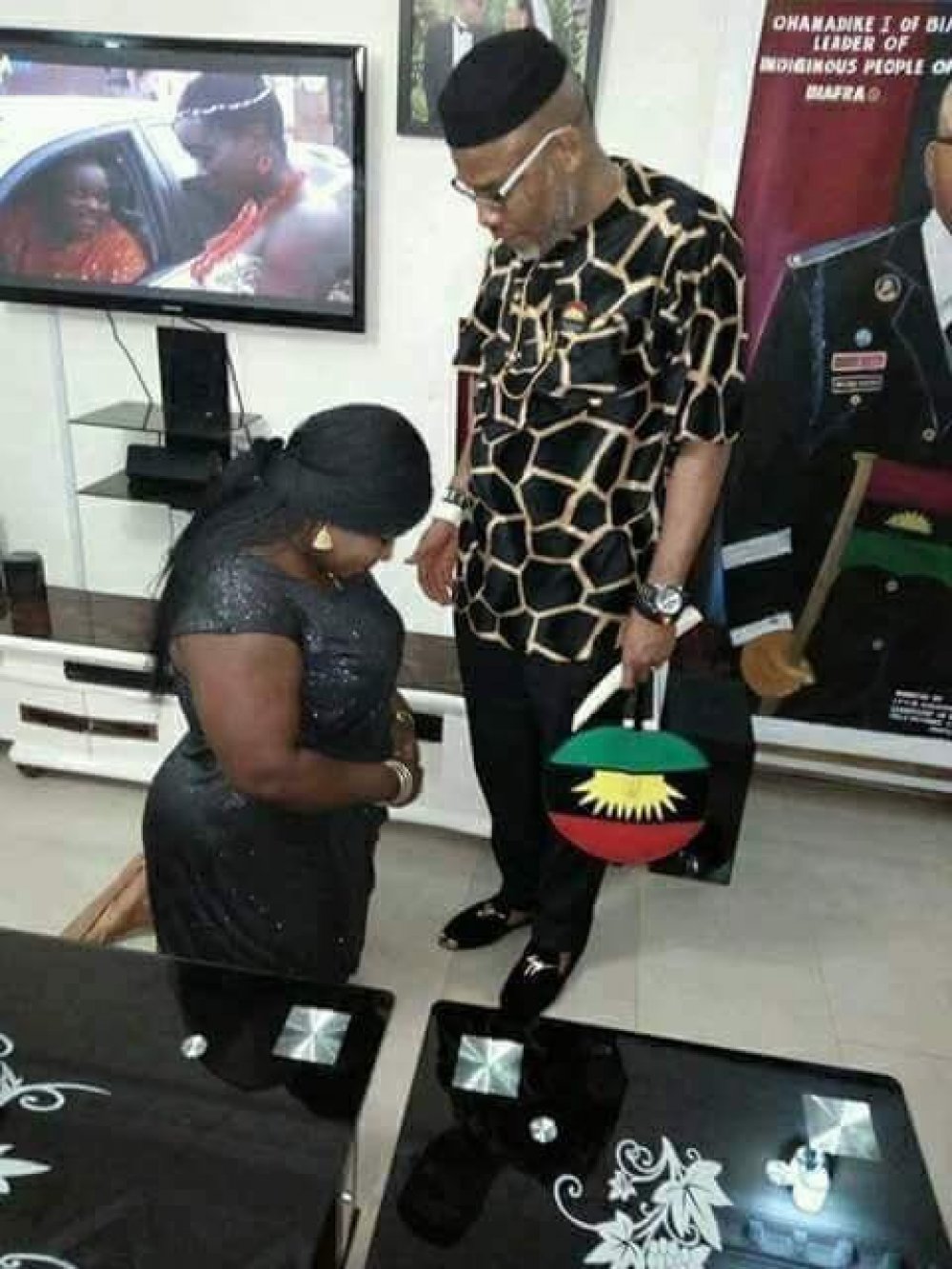 Kanu – though controversial and arguably toxic – has been praised for his sharp wit and intellect.

Many believe that is the reason he commands such humongous respect from his devotees who literally worship him.

Kanu has been campaigning for an independent state called Biafra in south-eastern Nigeria.

In 2015, Kanu was charged by the Nigerian government with “criminal conspiracy, intimidation and membership of an illegal organisation” – charges that could amount to treason.

He was released on bail in 2017 after spending more than 19 months without trial on treason charges.

He then renewed his campaign for independence, before his house in the south-eastern Abia state was raided by the military.

Who is Nnamdi Kanu?

Kanu was a relatively obscure figure until 2009 when he started Radio Biafra, a station that called for an independent state for the Igbo people and is broadcast to Nigeria from London.

Though he grew up in Nigeria’s south-east and went to the University of Nigeria, Nsukka, Kanu moved to the UK before graduating.

Soon after setting up now-banned IPOB in 2014, he spoke to gatherings of the large Igbo diaspora, calling for Biafran independence.

The plan for a Biafra state is not new.

In 1967 Igbo leaders declared a Biafran state, but after a brutal civil war, which led to the deaths of up to a million people, the secessionist rebellion was defeated.

Now-self-exiled Kanu is the latest in a line of ethnic Igbo activists taking up the cause of pushing for an independent state, saying the Igbos have been marginalised by successive Nigerian governments.