The Central Bank of Nigeria (CBN) has begun distributing new naira notes to its branches around the country.

The new currency will be delivered by the CBN to business branches across the country.

According to Vanguard, the Director of Currency Operations, Bello Umar, made the announcement in Abuja. New notes spikes demand for naira, exchanges for N730 per dollar in the parallel market

When will Nigerians begin to use new naira notes

The new notes are expected to be in circulation before December 15, 2022, and will circulate side-by-side with the old notes until January 31, 2023, when the latter would cease to be legal tender.

CBN Governor, Godwin Emefiele revealed this at the unveiling of the new notes.

The Central Bank of Nigeria has again threatened to effect the law against Nigerians defacing or abusing the Naira.

Nigerians are known to fold Naira or spray the currency into the air during parties, leading to people stamping their feet on it.

To dissuade the culture of defacing the notes in such a manner, Section 21 of the CBN Act 2007 was constituted to protect Naira.

Persons caught mutilating or defacing the notes will be made to pay a fine of N50,000 or face a jail term of six months. 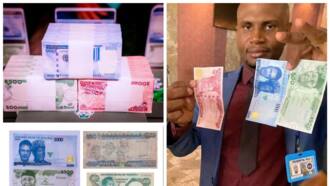 According to the CBN 2007 act, there are penalties for selling new Naira notes.

Part of the CBN act reads:

“It shall also be an offence punishable under Sub-section (1) of this section for any person to hawk, sell or otherwise trade in the Naira notes, coins or any other note issued by the Bank.

Details of the contents of their emails and changes were captured by Legit.ng.