A TikToker identified as @clutteredmother with 12 children has revealed that she faces criticism online, with many telling her to “sterilise” and “psychiatric help”.

Keep your advice to yourselves

According to New York Post, the mother of 12 said she couldn’t take her critics’ advice and would want to have five more children.

The 39-year-old TikTok star with over 36,400 followers responded to her critics in a cute video posing with five of her 12 children and wrote: 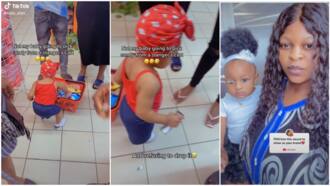 Baby confidently walks to stranger’s basket in supermarket, picks candy, walks away without returning it

“When people tell me I need to be sterilised. Actually, can I have five more of these little blond b****es?”

The video elicited mixed reactions, and below are reactions from TikTokers.

“I have three and I’m asked when I’m having more! Who cares, keep them coming,” another said.

In a follow-up video, she responded to a question from a follower, which read:

“What makes you laugh the most?”

“When people tell me I’m the reason the world is overpopulated,” she said in the video of her dancing with her kids.

In another video, she wrote: “Daddy is ready for baby #13”, leaving tongues wagging.

One of the followers asked her if the pregnancy was her 53-year-old husband’s fetish, and she said yes. 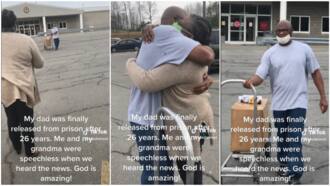 Some TikTokers weren’t surprised and claimed dating or sleeping with a pregnant woman was a fetish for many men.

Others didn’t like the idea of the woman having many children, and one said:

“So having kids to him is just a sexual pleasure. Please stop having kids.”

Meanwhile, Legit.ng earlier reported how a woman in Uganda made the headlines for achieving what most women may deem impossible, especially for her age.

Mariam Nabatanzi is a 41-year-old who has 44 children whom she is raising by herself. Nicknamed Mother Uganda or Mother Africa, Nabatanzi disclosed she would not stop giving birth.