Ebonyi, Abakiliki – The presidential candidate of the ruling All Progressive Congress (APC), Asiwaju Bola Ahmed Tinubu, has been conferred a chieftaincy title in Ebonyi state.

The 70-year-old former Lagos state governor was conferred with the “Dike Di Ora Nma I” title of Ebonyi state on Thursday, November 24.

Meanwhile, some Nigerians were not pleased with Tinubu’s latest achievement while comparing it with that of President Muhammadu Buhari was he was vying for office.

Some the critics described it as farce and a move to sell his image in good light despite all the hardship his party (APC) has put Nigerians through over the past seven years of their reign.

“This is how you guys packaged Buhari. God who did we offend? Even though even though you feed from post like this, even though” 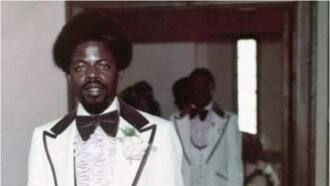 Tinubu resembled Donald Duke when he was younger? Old photo of Jagaban surfaces

“A man that promised to work on Lake Chad with our resources, while abandoning our own problems.”

“Now he has become a full member of Indigenous people of Biafra IPOB isn’t that wonderful?”