AllNews Media in a quest to document information about different blue-collar jobs available on the streets of Lagos came across a Ghanaian tricycle rider who has been in Lagos for over 10 years.

Victor David Kwame is a tricycle rider in Alapere, Ketu, who found himself in Lagos, Nigeria in 2011, while exploring Africa.

The young Ghanaian who has been to a handful of African countries has a thing for traveling and exploring.

According to him, his interest lies in business and he does not plan to go further in his education.

The first business he ventured into in Nigeria was the sale of alcoholic drinks, he however discontinued that business due to lack of genuine interest in it.

He moved on to work with ‘Mikano Generator’ for five year before he moved on to startup his transportation business.

Kwame purchased his first second-hand tricycle in 2017 and attempted the transportation business for the first time. Unfortunately, it didn’t work out well for him because of his inadequate knowledge of tricycles.

According to him, he encountered a lot of problems with the engine and eventually sold the machine.

“During that period, I lost my mom and had to return to Ghana.

“I stayed back in Ghana for a year and returned to Nigeria in 2018,” he said.

Kwame returned back to Nigeria for a fresh start in the transportation business but this time, he acquired a brand new tricycle on hire purchase and paid N3700 to learn the ropes of operating a tricycle.

The money paid was for a three-day-session, but he had to learn most of the things he now knows on his own.

How much does a tricycle operator earn daily?

Speaking about how much he earns from his business, Kwame referred to the low season with reduced patronage. The low season is when primary and secondary schools in Lagos are on vacation.

As a result of the school vacation, Kwame revealed that he currently makes about N8000 daily.

“The above amount is however subject to some deduction because I have to settle the transportation union in Alapere.

“Daily ticket fee is N1400, while N100 to N200 is charged at different parks across the area. You pay at the different ‘motor parks’ you pick passengers from.

“Total daily deduction is about N2400 on an average,” he said. 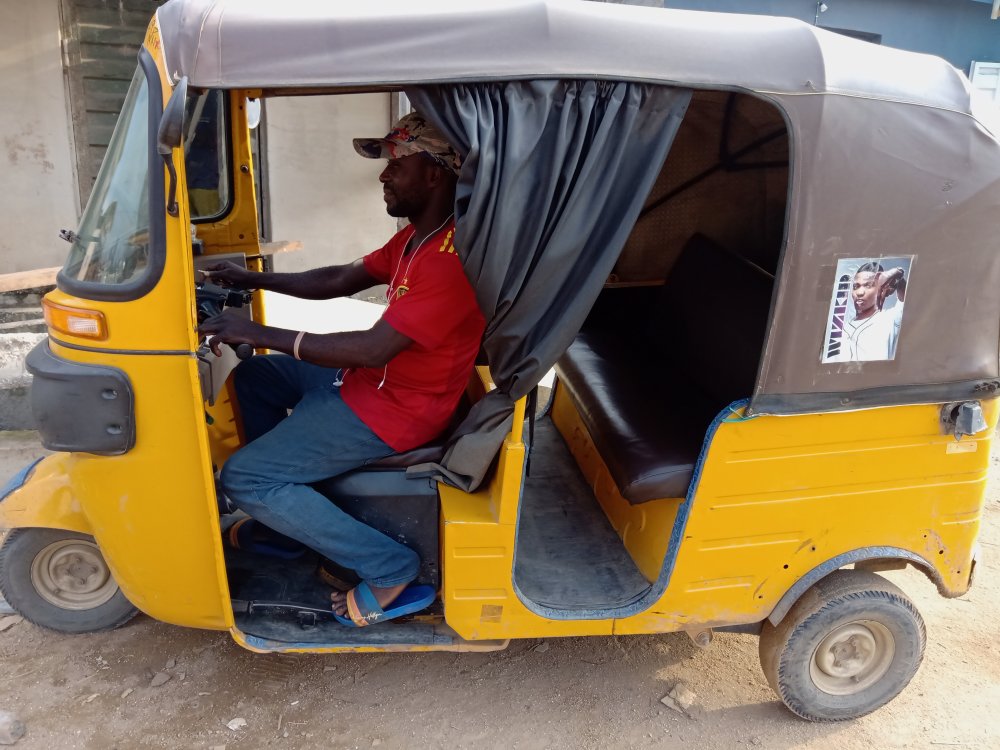 Kwame revealed that when schools are in session, he makes upto N10,000 daily, after all ticket deductions have been made.

The Ghanaian works seven days a week to pay-off his hire purchase debt.

He revealed that items like phones and jeans are quite expensive in Ghana and so, he occasionally sends them to Ghana on a small scale.

Challenges in the tricycle business

A tricycle with a good engine is important in this business otherwise, you will get frustrated by the high cost of maintenance.

Kwame is currently in a relationship with a Nigerian Yoruba lady from Ogun State, whom he plans to marry soon.

Kwame enjoys doing business in Nigeria and has made a lot of Nigerian friends over the years.

He stated that some of his friends are incidental to the success of his businesses.