Timi Dakolo has shared a cryptic message about victory and God fighting his battles after Pastor Bodun Fatoyinbo was called out by a former choir coordinator.

Modele, Fatoyinbo’s wife, was also accused of being complicit. Tega, a fellow chorister, died as a result of this treatment, she claims.

Timi Dakolo, who stood by his wife Busola Dakolo when she accused Pastor Fatoyinbo of raping her when she was a teenager, posted a cryptic remark on Twitter and Instagram in response to the current charge against Fatoyinbo.

“But I been tell una, una call me all kinds of names.

“Truth is truth, break it, drown it, cover it, blend it, burn it or even paint it. The thing is -Truth will always be truth and it will survive all this its own. Victory is truth realized.

“And just because you are having a hard time believing the truth doesn’t make it a lie”, he wrote.

On Instagram,  he wrote: “Dem no dey help God fight him battle. Sometimes him dey collect him victory small small.” 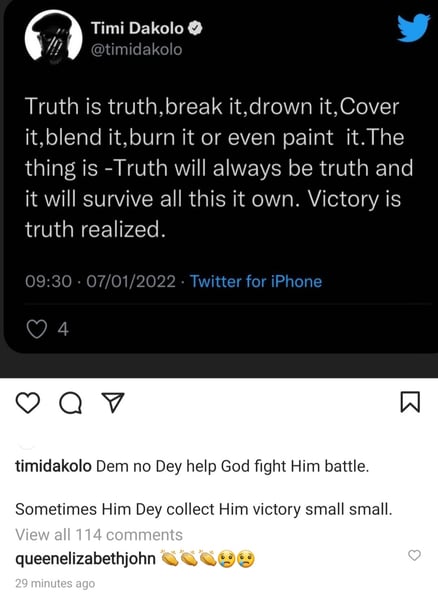