Uche Elendu Offers Apology To Lady She Is Accused …

Actress Uche Elendu has offered to apologize to the lady who called her out for allegedly bullying her sister in secondary school.

Recall that an Instagram user identified as ij_dinobi took to her Instagram story to call out the actress after Elendu condemned the unfortunate demise of 12-year-old Sylvester Oromoni of Dowen college who died from injuries he sustained after he was allegedly beaten up and tortured by his fellow students for refusing to join a cult.

Ij_Dinobi condemned Elendu, calling her a hypocrite for condemning an act that she had once done.

Ij_Dinobi stated that her sister recently saw Elendu at a wedding and was still scared despite already graduating from secondary school.

In response, Elendu said she is willing to give her sister a big hug and apologize. She, however, stated that she did not bully anybody back in secondary school.

She added that she did not unjustly punish a junior and neither did she inflict injury or beat up anybody as her secondary school was against it.

“Haaaa God have mercy!!! 22 years after.. The exaggeration tho.. pls who is your sister? I’ll like to give her a big hug and apologize for probably punishing her for being at the wrong place at the wrong time, or disobeying the school rules,” Elendu wrote.

“Who is a bully? I know I was a strict senior back in school but I didn’t punish unjustly neither did I inflict injury on my juniors or beat them up, the school was against that.

“Boarding should just be scrapped. I went through same drilling from my seniors but I can’t call that bullying.. haa me that they will knock on the head and I’ll see 1 million stars in 5 seconds… cos really juniors can’t escape being sent on errands or punished, I bet your sister and all the juniors I punished didn’t also perform their duties as prefects and seniors in their time. 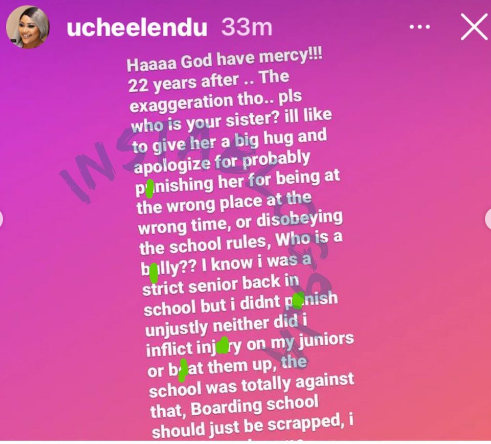 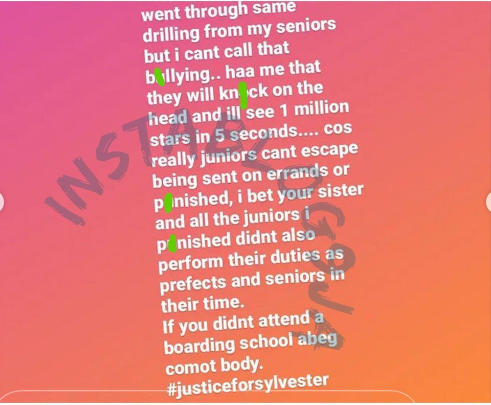 Why Africa Burns, By Tony Ogunlowo