“You Stayed With an Abuser for 13 Years”: Toke Makinwa Dragged for Saying Bella and Sheggz Deserve Each Other

Popular Nigerian media personality, Toke Makinwa, is once again being bashed on social media, but this time around for her opinion on BBNaija Level Up stars, Bella and Sheggz.

Just like most viewers of the show, Toke took to Twitter to react to Bella and Sheggz’s interesting relationship in the house.

The TV personality tweeted that it was safe to say both housemates deserved each other. A tweep then responded that Bella needed rescuing at this point.

To that, Toke replied by expressing that trying to rescue Bella is a lost cause. According to her, the female housemate is enjoying the attention from Sheggz.

“Rescued ke??? Someone that loves the attention, she’s under the covers, good luck with your rescue mission.”

See their exchange below:

Toke’s opinion on Bella and Sheggz did not go down well with a number of BBNaija fans who then reacted by reminding her how she stayed with her abusive ex-husband, Maje, for 13 years.

Read some of their comments below:

Evicted BBNaija Level Up star, Amaka, appears to be enjoying her newfound fame going by the love fans have shown her. 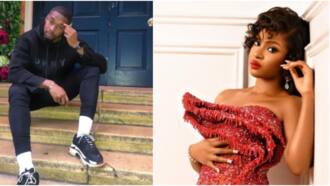 “You are sick, rude and never listen”: Sheggz insults Bella as they engage in heated argument over food

The reality star was sent packing from the show under controversial circumstances after her fellow housemates nominated her for immediate eviction.

In a new development, the ex-housemate, whom many fans argued was wrongly disqualified, took to her Instagram live to display the love they had shown her.

During the live event, Amaka flaunted two huge money cakes that was presented to her by her fans as she danced happily.

“Go to School, My Mates Are Behind Their Computers”: Old Woman Advises Young People, Her Video Stirs Reactions

“Go to School, My Mates Are Behind Their Computers”: Old Woman Advises Young People, Her Video Stirs Reactions